The American Chamber of Commerce (AmCham) in Mongolia presented its 2016 Business Leadership Award to Mr. Da. Ganbold, a prominent economist and board member of Erdenet Mining Corporation. 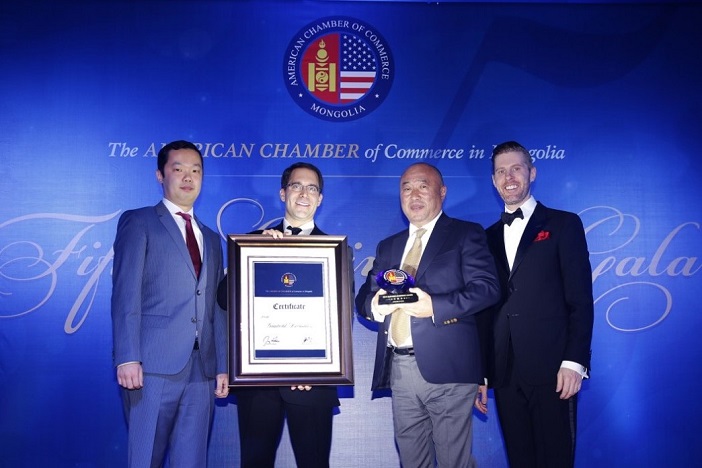 This distinguished award was presented at AmCham’s Fifth Anniversary Gala at Shangri-La Hotel, on Saturday, December 10, 2016. This annual award recognizes a leader in the business community who displays a commitment to promoting private sector growth, job creation, and free market principles.

Jay Liotta, the Chairman of AmCham Mongolia, presented the award and noted, “AmCham’s Board of Directors is very proud to be presenting this award tonight to Mr. Da. Ganbold. Your leadership roles in both the public and private sectors of Mongolia have played key roles in the growth of the private sector and the market economy in Mongolia since 1990. In particular, we applaud your efforts and contributions to the historic signing of the Oyu Tolgoi Phase II agreement.”

Mr. Da. Ganbold accepted the award and told the evening’s attendees, “The private sector plays a key role in the further growth and development of Mongolia. The growth of the sector will be the driving engine of the country’s growth. This is as an acknowledgement of the work that I and my colleagues did during my tenure in both the public and private sector, and I am honored to receive this prestigious award.”